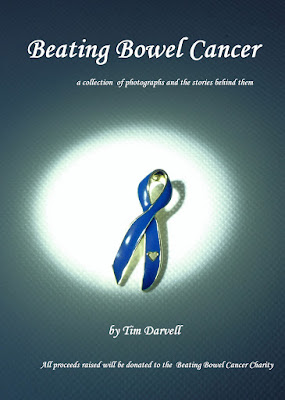 In April 2012 the dreaded cancer word came into our family. One minute I was sitting with my mother expecting a normal discharge from hospital, and then in the blink of an eye our world was turned upside down when we were told that mum had bowel cancer. She had been having trouble going to the toilet and was sent to Wexham Park Hospital for an endoscopy, and it was at that point we learned she had bowel cancer. Her treatment involved radiotherapy and chemotherapy to shrink the tumour, before a successful operation to remove it was performed in the September. She made an excellent recovery, although she had an operation to remove a cancerous nodule from her left lung in January 2013, and had to undergo the same operation on her right lung in the March.  For the last 2 years she has done really well, but unfortunately in November 2014 we discovered that the cancer had returned, and underwent successful surgery in February to remove the nodule. She is making another amazing recovery.

The care and attention mum has received at Mount Vernon, Wexham Park and Harefield Hospitals has been first class, and it was while mum was undergoing treatment that I decided I wanted to do something to raise funds for a cancer charity and give something back. As the project has developed it has become obvious just important it also is to raise awareness about bowel cancer too. Unfortunately running a business on my own imposes restrictions as to what I could do, but the idea of writing a book seemed the perfect solution. I have been a keen amateur photographer for a couple of years and the idea I had was to write a book featuring photos on various subjects, ideas and technical approaches. “Beating Bowel Cancer” therefore is a charity book featuring a collection of photographs and the stories behind them to raise funds for the Beating Bowel Cancer charity. All proceeds will be donated to the charity.

The ebook version on Amazon is £2.65 of which the £1.39 I earn will be donated to the charity. It is for the Kindle, but there are freely available Kindle reader apps for Ipads, Iphones and computers. From outside the UK please use Amazon.com to buy the book.

The physical book version is available for £7.21 on Amazon with just over £1 going to the charity  and can also be bought from Create Space for $11.49. All physical copies will raise £1.01 for the charity.
There is a justgiving page for anyone wishing to make a donation to the charity. You can also donate by texting TIMD66 £1 to 70070

The plan is to try and sell 1000 copies, and as at  31st March 2015 I have sold 327 copies so I have a long way to go! Absolutely every penny I earn is going to be donated to the Beating Bowel Cancer charity. To have any chance of doing this not only am I asking people to buy a copy, but to help spread the word to as many people as you can through as many channels open to you as possible. The marketing seems to be a much bigger challenge than writing the book itself. If anyone wants to know more they can email me here.

I am currently in the process of writing a new book entitled "Lives & Times", which will feature photographs of people with anecdotal stories. Once again all proceeds will be donated to Beating Bowel Cancer, and the book will be published later this year.
Posted by tim at 12:23