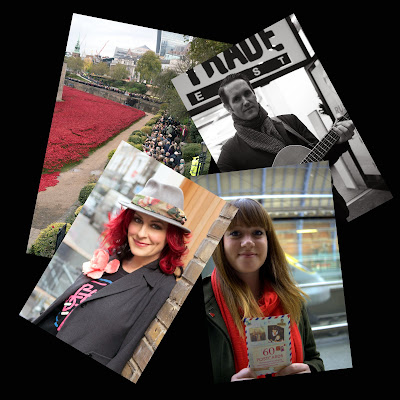 This week I have certainly experienced the highs and lows on this journey. The week got off to a great start. Book 1 generated 4 sales over a few days, which means at the end of the month I will be able to donate some more royalties to Beating Bowel Cancer. Sales of the first book are now at 322, and over the last two years over £500 has been raised for the charity.

This was followed by a brilliant day in London where no less than 4 photos were done for book 2 due out in 2015. Carrie Grant kindly agreed to be photographed, but it meant I had to be in London for 11:00 to meet her. This meant I had to sort work out, and run the office phone diverted to my mobile, and get all the deliveries out the day before. This worked out fine. I took advantage of my time in London to also photograph Rachael Chadwick, the author of the wonderful 60 Postcards book. I then met up with Tim Wheeler, the lead singer of ASH who was in East London to promote is debut solo album Lost Domain. I even had time to visit the poppies at The Tower Of London, and I might even have a photograph for the book from that too! It was one of the best days so far in the making of book 2.

Alas then we had the bad news. Mum had her annual appointment with her consultant the following day. We expected it to be a formality, but were dealt the bombshell that the cancer has returned. A recent CT scan has showed up a nodule on her left lung. Having had 2 years of remission, and everything looking so good this was a real shock. Mum will now have a PET scan to see if the cancer has spread anywhere else, and then in early December she will see the consultant again where a plan of action will be discussed. She is remarkably brave and determined, and typically is more concerned about the welfare of her horse!

So its an uncertain few months ahead, and we just have to be with mum every step of the way. I am determined to continue on with the book and finish it as planned for publication in Spring 2015, but if events dictate otherwise then that might have to change.

The continued support from people taking part in the book is overwhelming, and this week Gail Porter confirmed her participation, so I am meeting up with her in the next few weeks. I have also made contact with Christopher Biggins, and I am hoping he will also confirm his initial yes to take part.